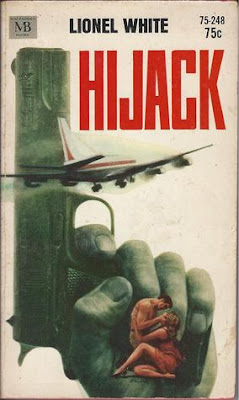 I’m fascinated by shadow ops that involve hijacking—skyjacking, train robberies, piracy, etc.—so when I ran across the 1969 novel Hijack by Lionel White I was immediately intrigued. The first thing I noticed was the striking cover: the image of a giant upraised pistol next  to the single word “HIJACK” emblazoned in red, with a jet airliner and a couple in erotic embrace in the foreground, is a minor masterpiece of paperback cover design. On the strength of the cover alone I might have bought the book; knowing that the author was Lionel White, one of the old masters of crime noir fiction known particularly for his heist stories—which have been called precursors to the brilliant Parker novels by Donald Westlake—I simply had to have it.

Does the story live up to the cover? Almost. As you can probably guess, it involves the hijacking of an airliner, sparked by the steamy encounter between a beautiful, money-hungry ex-stewardess called “Sis” and an ex-Air Force pilot recently returned from Vietnam nicknamed “Dude”. Sis has inside information that a particular route transports millions of dollars in small bills in its cargo hold every month, and she uses her considerable charms to convince Dude to help her get it. So Dude assembles a team and plans an audacious air-heist.

Along the way we learn the backstory of the hijackers, most of whom were ‘Nam buddies of the rogue pilot Dude. We also learn more about several of the  VIP passengers; it turns out (rather unrealistically) that on board the ill-fated flight are a French movie star, a top American scientist, a Russian defector, his CIA escort, the airline’s majority stockholder and a famous preacher. In standard crime noir fashion, at some point everything goes sideways, as the all-too-flawed characters turn a carefully laid plan into a clusterf*k of foul-ups, betrayals and desperation moves. There’s some brutal violence, loose sex, nasty rape and heavy drinking as the various players crack under pressure and revert to their primal instincts. The offbeat ending is slightly anti-climactic and felt a bit rushed, but it’s probably as good as any for this offbeat tale.

I’m a little surprised Hollywood never made a film out of this novel. Several of Lionel White’s earlier works were made into movies, but maybe by 1969 the 64 year-old author was no longer a hot property. Or maybe a story about skyjackers—in an era when revolutionaries, terrorists, criminals and crazies were hijacking airplanes with alarming frequency—hit too close to home. Apparently Quentin Tarantino is a big White fan; this would make a great Reservoir Dogs or Pulp Fiction-style noir thriller. No matter, though; classic crime paperbacks like this one are an art form of their own and deserve to be read and enjoyed on their own terms. The biggest crime is that this book is so obscure and difficult to find; if you can track it down for a reasonable price (I paid $10), I would advise picking it up. Hijack is recommended for fans of classic crime noir and heist thrillers.