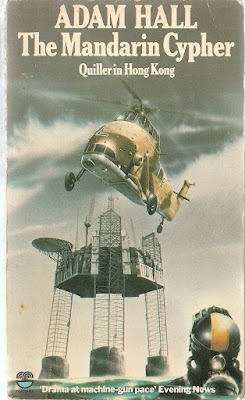 The Mandarin Cypher is the sixth book in the brilliant Quiller series by Elleston Trevor (writing as Adam Hall). Quiller is a “shadow executive” who takes on dangerous missions for a deep black agency within the British government known only as “the Bureau”. Quiller is basically a Cold War British ninja: expert martial artist, driver, pilot, scuba diver; adept at secret communications, stealth and spycraft.

In many ways Quiller is the anti-Bond and anti-Helm. Almost monk-like in his pursuit of shadow op perfection, he doesn’t gratuitously womanize, drink, or lose his temper; he’s always highly technical, introspective and controlled on his assignments. Where James Bond is a stylish playboy, Quiller is an introverted geek; where Matt Helm can be a cowboy and a thug, Quiller is a model of forbearance and professionalism. He’s like a spy version of Donald Westlake’s Parker character: a “grey man” with little personality or personal baggage; all business, totally focused, disciplined and stoic during ops, and absolutely formidable at his chosen profession. The major difference being that Parker is a criminal out entirely for himself, whereas Quiller is a Queen and Bureau man who has to play by other people’s rules.

In this installment, Quiller is sent to Hong Kong to investigate the death of a fellow agent in a supposed fishing accident. Quiller quickly finds himself targeted for assassination by a cell of Red Chinese agents and romantically entangled with the beautiful but needy widow of the murdered agent. Quiller learns that things are not as they seem, and something fishy is afoot out in the South China Sea. It’s all related to an operation code-named “Mandarin” about which Quiller is being kept in the dark by his controllers in London. After about 125 pages of Hong Kong intrigue that some readers might find a bit tedious, the climactic action sequence begins: Quiller must infiltrate an oil rig in international waters owned by the People’s Republic of China and find out what it’s up to. This leads to some intense scenes, as Quiller must survive long scuba dives, naval mines, hand-to-hand combat, hostile Chinese forces and bombshell directives from his London controllers. The surprise ending is highly dramatic, if a bit improbable.

As always with this series, the action is tense and realistic, and the stream-of-consciousness calculations of the computer-like Quiller put you right inside the head of the savant-spy. Here’s a passage that nicely sums up both the writer’s style and Quiller’s philosophy of “the edge”:

So all you can do is settle for the situation and check every shadow, every sudden movement, and try to make sure there’ll be time to duck. And of course ignore the snivelling little organism that’s so busy anticipating what it’s going to feel like with the top of the spine shot away, why don’t you run for cover, trying to make you wonder why the hell you do it, why you have to live like this, you’ll never see Moira again if you let them get you, trying to make you give it up when you know bloody well it’s all there is in life: to run it so close to the edge that you can see what it’s all about.

Having read six or seven Quiller books now, I have to concur with the widely held opinion that it is one of the very best spy fiction series ever written. The Mandarin Cypher is another fine installment in a series that no fan of the genre should miss. Highly recommended for fans of thinking man’s spy fiction.

Get a copy of this book here.