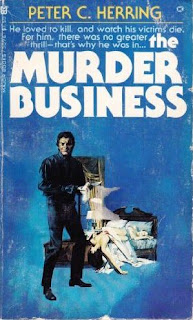 The Murder Business by Peter C. Herring is an obscure thriller from 1976 with a premise so intriguing that I decided to track down a copy and read it. It’s basically a what-if  story: what if James Bond, due to psycho-sexual pathology and a tough childhood, turned to the “dark side” and become an assassin working for a SPECTRE-like cabal headquartered in the USA instead of Her Majesty’s Secret Service?

The dark side Bond in question is a handsome, dark-haired professional killer named Michael, who, like Bond, lives in a London flat, jets around the world on dangerous missions for a powerful cabal, is a smooth, stone-cold operative with a way with killing men and loving ladies alike. The cabal in question here is not MI6, but The Board–a circle of ten very powerful men who are said to secretly run the USA, and by extension, the world. The Board was apparently responsible for the assassinations of the Kennedy brothers in the 1960s, as the latter were threatening to expose and reign in their shadowy power. The Board has toned down their assassinations in the 1970s, but are still targeting politicians who threaten them with exposure–often dispatching their best operative, Michael, to do the wetwork.

The novel begins with Michael doing what he does best: sneaking up on a troublesome VIP and efficiently executing him with his trusty knife. Then we get to go inside the Board’s meetings as they plot more killings to ensure their continued world domination, followed by Michael doing another job–this one rather kinky, as it involves sex, killing and Michael’s rather orgasmic reaction to both. We also get to meet Jenny, Michael’s beautiful girlfriend who is the first person in the world that the stone-cold killing machine has ever had feelings for.

The story takes a sudden turn when the Board discovers a plot to destroy them by a rival organization seeking to unseat them as the world’s top Illuminati. Michael, with Jenny in tow, takes a vacation to the south of France to get away from the heat but soon finds himself hunted by unknown assassins. Who is trying to kill him and why? What should Michael do about Jenny, now that she knows he is involved in the murder business? The tale gets darker and more violent as more assassins show up, people are killed in gruesome ways, the Board is hit hard and the stress of it all causes a mental breakdown of not only Jenny but the normally Terminator-like Michael.

Despite the promising set-up, I’m afraid Peter Herring is no Ian Fleming. The writing is often clumsy and over-written; there’s a lot of irrelevant detail about what Michael ate, the color of the sky, etc., the characters are rather cliched, and the story lacks the flair that made Fleming’s Bond a worldwide phenomenon. This reads like a men’s adventure novel that is trying to be more literary than it needs to be, or than the author is capable of. Which is too bad, because Michael had the potential to be for the spy genre somewhat like what Parker was for the crime genre: a psychopathic protagonist who shows us what life can be like on the dark side, if you throw off the yoke of governments, laws and morals and become a freelance Shadow operative dedicated purely to the ruthless execution of your craft. But to achieve that status, Herring would have had to be a better writer; he simply doesn’t bring the writing chops or technical details that Donald Westlake did to the Parker series. Nevertheless, if you are intrigued by the premise and fascinated by dark side spy, crime and assassin fiction (what I call “shadow-fiction“), you may find The Murder Business worth your time.