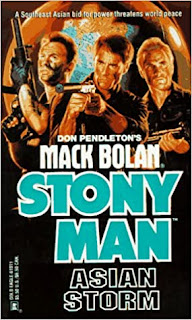 The Killer Elite by Robert Rostand is best known for being made into a 1975 film starring James Caan and Robert Duvall — a decent movie that was very different from the novel (though it did feature one of the first appearances of ninjas in American media!).

This is another story from those cynical, paranoid 1970s, when, in the wake of the high-profile assassinations of the 1960s, Vietnam, Watergate, failed revolutions and revelations about the CIA’s nasty antics around the world, every thriller seemed to involve shadowy government or corporate entities scheming to overthrow regimes, assassinate leaders and deceive humanity (sound familiar?). The works of Robert Ludlum, James Grady’s Six Days of the Condor, and the film Parallax View are good examples of the genre; The Killer Elite adds an assassination storyline reminiscent of Frederick Forsyth’s classic The Day of the Jackal.

The novel’s protagonist, Mike Locken, is an operative for SYOPS–a secret American agency tasked with transporting and securing Soviet defectors and other VIPs who may be targets of enemy action. As the story begins, three international assassins have been identified entering England following an anonymous tip-off. Their target is a popular African leader named Nyoko living in exile in London, whom his homeland’s strongman leader wants to eliminate to defeat a popular uprising.

The premise of the novel is an intriguing one: what if a government used a “killer elite” of assassins to take care of problems instead of military forces? It was inspired by an actual proposal made by a member of the British House of commons, as related in the novel to Locken’s boss:

Tell me, Collis, have you ever heard of John Lee? … Member of Parliament here a few years back. Absolute terror on military spending. Made a brilliant speech in the Commons in sixty-nine with a radical proposal on how to cut the size of the British Army. Lee’s idea was to turn it into a small elite of political assassins. … His logic was that a small power like Britain couldn’t hope to compete militarily with the superpowers. Lee thought in this day the political assassin was more fearsome than the Bomb, hence a better tool of diplomacy. His speech made quite a splash in the dailies.

The African strongman has decided to adopt this policy, employing mercenary assassins in place of a standing military to take care of problems like Nyoko. The other major plot element driving the narrative is the fact that Locken was nearly killed during his previous assignment, by an assassin who happens to be one of the three hunting Nyoko. So Locken has an opportunity for revenge, and his new assignment becomes very personal.

After this intriguing setup, the novel becomes a chase story, as Locken has to safely escort Nyoko and his daughter out of Britain while luring the hated assassin out so he can kill him. There are twists and turns as treacheries and deceptions are discovered, and a fairly dramatic final confrontation. But just as the story climaxes, Rostand decides to give us several pages of exposition explaining exactly how the plot twists and machinations led to this point, which I found jarring and not very good story-telling. I also found several of the characters improbable, like the old man Nyoko and his city girl daughter, who suddenly turn into fierce primal warriors in the Welsh bush.

According to his bio, author Robert Rostand (real name Robert Hopkins) spent considerable time working and living abroad, which brings a worldly sophistication to his writing that elevates this novel a notch or two above the typical thriller. But it doesn’t reach the heights of other well-travelled authors like Forsyth, Trevanian or Adam Hall. The Killer Elite wasn’t a great read, but it was interesting enough that I’ll probably try the next installment of the Mike Locken series or other works by Rostand.

Get a copy of The Killer Elite here. 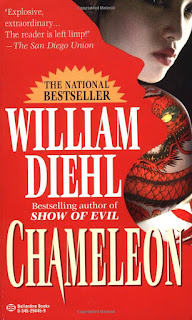