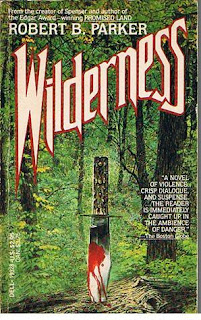 After reading many novels about professional assassins targeting civilians, it was fun to read a thriller where the tables are turned: amateurs target a professional killer for death. That’s the plot of Wilderness, published in 1979 by mystery writer Robert B. Parker (creator of the Spenser: For Hire series).

The book hooks the reader from the first page, as protagonist Aaron Newman witnesses an execution-style murder of a woman while out jogging on the railroad tracks. He notifies the police, and learns to his horror that the killer is a well-known gangster and murderous psychopath named Adolph Karl. Karl soon lets Newman know in the strongest possible terms that he shouldn’t testify about the murder, by having his thugs tie up his wife, sexually abuse her and threaten further retaliation. Newman decides that rather than cowering in fear or allowing a killer to walk free, his only honorable option is to go on the offensive and kill Karl himself. He recruits his neighbor, a big, tough Korean War vet named Chris, and they start stalking Karl and his gang.

It was funny reading how these amateurs plan and execute their hit. Some of Newman’s tactics were ridiculous, like posing as a deaf beggar and walking right into Karl’s office to reconnoiter his defenses. Since Karl had immediately fingered Newman as the rat despite the police report being confidential, why would Newman not assume that Karl knew what he looked like? Also, targeting his entire gang seems a little ambitious for amateurs; wouldn’t they at least consider going into a witness protection program?

This is really a story about the relationship between the emotionally needy Newman and his rather cold and domineering wife, and how Newman feels the need to prove his manhood by standing up to Karl. I didn’t like either character that much, but Parker paints a believable picture of their personal drama and dysfunction. The only likeable characters were a sexually charged hitman and wife sent to take out Newman; they would have been right at home in a Quentin Tarantino film.

The novel really gets exciting about halfway through, when Newman, his wife and Chris decide to hunt down Karl and his gang while they’re on a hunting trip to a lake in the Maine wilderness. It becomes a tense tale of wilderness survival, manhunting and sudden death that was gripping all the way to the end.

Overall, I enjoyed Wilderness; it was a fast-moving, fairly believable tale of how ordinary people might become ruthless killers if put in a horrific enough situation. And that’s why I enjoy shadow-fiction so much: because it lets us imagine how we might be if we ever fully embraced our shadow selves.

Get a copy of Wilderness here.