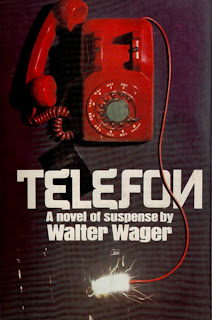 Continuing with novels in my current favorite genre–espionage and assassin fiction from the paranoid 1970s–today my selection is Telefon, published in 1975 by Walter Wager. Like The Killer Elite, this book would probably be forgotten today had it not been made into a Hollywood movie two years later, starring Charles Bronson.

I was intrigued by the novel’s premise, that dozens of Soviet sleeper agents embedded in American society at the height of the Cold War in the early 1960s were still active in the mid 1970s, and could be activated by a simple telephone call. Wager gives this an additional Manchurian Candidate twist by making the agents unaware of their own status and mission. Through deep hypnosis and drugs, the sleepers have been programmed to forget that they are Russian agents, and given specific sabotage missions that they will perform robotically when they receive telephoned code phrases. The missions are designed to destroy key military-industrial facilities so as to spread chaos in the United States in the event of total war.

The plot hook is that a maniacal Stalinist traitor within the KGB has gone rogue, made off with a book containing the sleeper agents’ phone numbers and activation codes, and is systematically activating them in an attempt to provoke World War III. The novel’s protagonist is a KGB super-spy named Tabbat, who has been sent to the States to stop the maniac before he brings nuclear retaliation upon mother Russia. Tabbat is like a Russian James Bond but better: smooth with the ladies, deadly with handguns, tactically brilliant and possessed of a photographic memory. He’s also hip to American culture, loves Frank Sinatra and exchanges witty banter and plenty of sex with his beautiful female KGB assistant “Barbi”.

The novel is basically a manhunt story, as Tabbat and Barbi race across America trying to catch the maniac before he destroys more targets, without arousing the suspicion of American authorities or getting taken out by hostile Russian agents. There’s a twist or two along the way and some amusing cultural commentary on 1970s America that keep things interesting.

Overall, this was a competent and a stylish Cold War thriller, reminiscent of Frederick Forsyth and Trevanian. Though the plot was somewhat far-fetched and it read more like a screenplay than a novel at times, I found it a fast and entertaining read.

Get a copy of Telefon here.