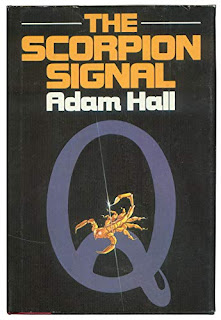 The Scorpion Signal, published in 1980, is the ninth entry in the brilliant Quiller spy fiction series by Trevor Elleston (writing as Adam Hall).

In this installment, “shadow executive” Quiller is called back to London after only two weeks of recovery time from his previous mission, due to an international emergency that calls for his special skills. Apparently a fellow Bureau operative named Shapiro was captured in Russia and taken to the notorious Lubyanka KGB headquarters in Moscow, but somehow escaped only to be abducted again in Germany, presumably by the KGB. Shapiro has intimate knowledge of various top secret Western projects, including a highly successful Russian spy network code-named “Leningrad”. Quiller’s mission is to find Shapiro, rescue him if possible, and if not, make sure he stays silent for good before he is forced to spill the beans.

Quiller at first declines the mission, but as someone who is not motivated by money, power, glory or duty so much as by personal excellence and the challenge of life on the edge, he soon relents. He is infiltrated into Moscow, and quickly finds himself playing tense cat-and-mouse games with enemy forces. Elleston excels at describing the mental side of spycraft; we get a running commentary of Quiller’s mental calculations as he tries to avoid being captured or killed by border guards, police, KGB and rogue agents. There are long stretches of very detailed descriptions of Quiller’s driving tactics, evasion maneuvers, martial arts strikes, physical condition and thought processes as he tries to stay alive. These stretches are my only real criticism of the series: they sometimes get a bit tedious and you start wishing the super-spy would stop his autistic streams of thought and move the narrative forward.

Elleston also does a great job evoking the paranoia of late Brezhnev-era Moscow, where dissident groups are protesting, police are stopping people randomly, and the KGB are always threatening to break into your flat or safe house and haul you away to Lubyanka. In fact, Quiller finds himself there at one point, facing brutal interrogation. But he manages to get free, then gets to work tracking down the people who turned him in and taking them out of action.

As is usually case in these novels, Quiller is kept partially in the dark by his London controllers, which creates misunderstandings and failures that become lethal dangers in the field. After a lot of intrigue where it’s not entirely clear where things are going, the narrative kicks into overdrive when Quiller finds Shapiro, now half-deranged from his stay in hotel KGB, and discovers what’s really going on. The story then becomes a classic race against time to stop a deadly mission before it sparks a superpower conflagration.

This was another exciting installment in the superior Quiller series. It’s basically a series of tense chases, evasions, interrogations, investigations and killings, all with big geopolitical implications–which is what a great spy novel should be. Highly recommended for fans of thinking-man’s spy fiction.

Get a copy of The Scorpion Signal here.