Whenever I’m in the mood for a quick, entertaining men’s adventure story involving shadow warfare, my go-to author is Jack Higgins; he never disappoints. The Violent Enemy, published in 1966 (originally titled A Candle for the Dead), is no exception. Featuring two of my favorite plot elements–a prison break and a heist–and a backstory about the Irish Republican Army, the novel sounded right up my alley.

Protagonist Sean Rogan is similar to several other Higgins protagonists (most notably Liam Devlin of The Eagle Has Landed): an ultra-tough, dangerous Irish shadow warrior who led special operations in World War II and the guerrilla war against British rule in Ireland. He has spent twelve of the last twenty years in prison, and is now doing hard labor in a maximum security prison in England.

Rogan is denied early release as the novel begins, which sets up a plot element that Higgins used in several other early novels (Hell is Too Crowded, Dark Side of the Street, Hell is Always Today): a prison break. During his latest stay, escape artist Rogan has figured out a complicated route of the prison that involves cutting through wire cages, climbing up beams, crawling through ventilation ducts and roping down walls. But the real challenge is figuring out how to get through the desolate moors that surround the prison and find a safe haven, a clean identity and transportation away from the scene. When all of that is offered by a former top IRA man on the outside, who apparently wants Rogan out real bad but doesn’t say why, Rogan can’t refuse.

Rogan executes the jailbreak and soon finds himself back with his old IRA boss, named O’More, who has a job that calls for Rogan’s special talents. O’More wants Rogan to rob an armored car as it is delivering a large sum of cash to a train at a stop in a small village. He has assembled a crew which, as per usual in a Higgins novel, includes some rather nasty and treacherous characters and an attractive young woman who quickly becomes Rogan’s romantic interest. This leads to personal dramas and betrayals that threaten to derail the plot, but Rogan is a true alpha warrior and he asserts his authority on the unruly gang.

As Rogan and his crew are planning and executing the heist, a parallel police investigation is going on, led by a Scotland Yard detective who Rogan rescued from the Germans back in ’43. The detective doesn’t consider Rogan a real criminal, but a political prisoner, and since the troubles that landed Rogan in prison are no longer hot, let’s just say that he’s not a very motivated pursuer. The story moves quickly to a satisfying climax in the usual Higgins style, with the heisters on the run from the coppers, double-crossers on the run from both, and one or two twists along the way.

This was a fast-paced, entertaining read, with no wasted verbiage, simple but compelling characters and action that never goes over the top — all very typical of Higgins’s early work. This is basically a prison break, heist and getaway novel, much like the novel Breakout that I reviewed here. I was a little disappointed by the lack of IRA-style shadow warfare, but overall I have no complaints.

Get a copy of The Violent Enemy here.

A Fine Night for Dying 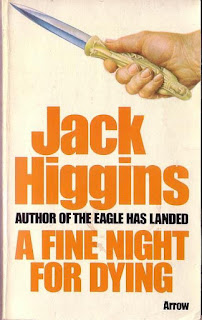 In the spy-crazed 1960s, an obscure author named Henry Patterson wrote a series of six novels under the pseudonym “Martin Fallon” about a spy named Paul Chavasse. These books would probably be all but forgotten today had Patterson not gone on to become the world-famous, mega-selling author “Jack Higgins”, thanks to his smash hit 1975 novel The Eagle Has Landed. Fortunately, the Chavasse series was republished under the Higgins name and are easy to find, so we can all enjoy these entertaining espionage adventures from a simpler time.

Paul Chavasse is basically a brainier, less rakish version of James Bond; he has several university degrees, speaks numerous languages, excels in spycraft, firearms and hand-to-hand combat. He works for a small, secret department of British intelligence called the Bureau (just like Quiller), has a boss called Mallory and a secretary named Jean, who send him around the world on difficult and sensitive jobs that require his special talents.

In the sixth entry in the series, A Fine Night for Dying, Chavasse is called in to investigate a human trafficking operation after a London underworld boss is found dead in the English Channel, wrapped in an anchor chain. This might sound like a modest assignment for a super-spy, but Chavasse soon uncovers an international connection, as the ringleader turns out to be a Communist and his associate a Colonel in the Red Chinese army. Most of the action takes place at sea, as Chavasse, with the assistance of the Jamaican brother of the slain underworld boss out for revenge, track down the leaders of the murderous ring of infiltrators.

The novel’s main villain is a compelling character named Rossiter–a blonde ex-Jesuit priest who, after being imprisoned in North Korea during the war, switched faiths from Catholicism to Communism and became a ruthless killer. Korean brainwashing was a popular theme in that era, explored in the classic novel The Manchurian Candidate and in Higgins’ early novel Comes the Dark Stranger. Rossiter’s conversion is symbolized by his preferred weapon: a razor-sharp dagger with a handle carved in the likeness of the Madonna (see cover above).

Like every Higgins novel I’ve read, this one is lean, linear and moves along at a breakneck pace. You don’t get much filler in a Higgins story–no excessive description, graphic sex, technical specs or unnecessary sub-plots of the sort that would plague the genre by the 1980s, when writers like Van Lustbader and Clancy were best-sellers. You do get well-drawn characters, narrative tension, plot twists and plenty of action; Higgins is a master at keeping the pages turning and telling an exciting story without turning it into a comic book.

Some people might consider these early Higgins’ novels a bit dated or politically incorrect, but for me that’s part of their appeal. Here, technology and politics take a back seat to old-fashioned grit, courage and heroism. Men are men, for good or ill–driven by traditional masculine values like honor, bravery, greed, lust, violence, brotherhood and patriotism. Women are more traditionally feminine, but they’re no shrinking violets–being often as virtuous, heroic, brave and passionate as the men. Higgins isn’t trying to push a political agenda, but to tell a fast-paced, entertaining story, and he does that as well as anybody in the business. For a great overview of Higgins’s early novels, see this post over at the Gravetapping blog: Jack Higgins: The Golden Age Novels.

A Fine Night for Dying is a typical novel from Higgins’s “Golden Age”, which means it’s a fun, quick read that fans of adventure and espionage fiction should enjoy. Get a copy here.

Death of a Citizen