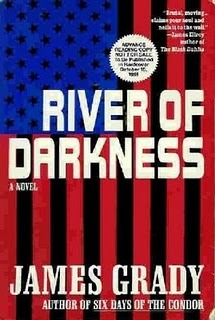 James Grady stormed onto the spy fiction scene in 1974 with his debut novel Six Days of the Condor (basis for the classic film Three Days of the Condor), a novel I greatly enjoyed for its paranoid take on America’s shadow government, its memorable characters Ronald Malcolm and the French assassin Joubert, and its brilliant concept of “Section 9, Department 17” which I have written about previously here.

Grady wrote a sequel to Six Days of the Condor called Shadow of the Condor the following year, which I read years ago and found rather forgettable. I recently decided to give Grady another try with his much meatier offering from 1992 called River of Darkness (aka The Nature of the Game). This is Grady’s attempt to write a sweeping, epic novel about American shadow wars from the 1960s to the 1980s, as told through the experiences of ex-Green Beret and CIA operative Jud Stuart.

The narrative switches frequently between Stuart’s current travails as a Jason Bournesque agent who has become expendable and is on the run, to the efforts of an honorable ex-marine tasked by shadowy D.C. players with tracking Stuart down and taking him out, to flashbacks to Stuart’s earlier adventures as a shadow operative. The first flashback is especially intense, as Jud is air-dropped behind enemy lines in 1960s Laos and has to survive a close encounter with Pathet Lao guerrillas. By the early 1970s Stuart is working for a shadowy outfit run by rogue American generals, taking part in everything from the Pinochet coup to spying on the Nixon White House, raiding Russians in Afghanistan, drug-running and assassinating VIPs. But Stuart eventually becomes a liability who knows far too much, so he becomes a hunted man as the novel opens.

The flashbacks to Jud’s covert operations were the novel’s highlights for me, both for the riveting action sequences and the authentic, historically relevant nature of the ops. This is where Grady, a former investigative journalist, shines: he gives the reader a sense of what really goes on behind the headlines, in the deep shadows where America’s secret wars are won and lost.

Unfortunately, there is a lot more going on in this novel than just Jud’s black ops, such as banal romances, family dramas, dull D.C. intrigues and fairly generic characters. It feels like Grady was trying to emulate best-selling spy novelists of the time like Ludlum, Clancy and Van Lustbader, who favored sprawling, complex, bloated epics over the leaner, more focused thrillers of yesteryear (like Six Days of the Condor). While I’ve enjoyed more than a few fat thrillers over the years, I thought this one had a little too much going on, and too many characters and machinations that just weren’t very interesting.

All in all, I’d say River of Darkness is about half a riveting novel with authentic detail and gripping action, and about half a rather plodding and padded effort to make the novel more epic and Ludlumesque. It’s still a cut above run of the mill and comic book spy thrillers, and worth reading if you’re interested in a realistic fictional take on some of the dark goings-on in the Vietnam to Iran-Contra era in the name of American freedom and security.

Get a copy of River of Darkness here.