Ted Allbeury was a prolific British spy novelist who, before becoming a writer, actually lived the life of a Shadow Operative as a secret agent behind enemy lines in World War II. I’d never read his work before, but when I saw the description of his 1983 novel Pay Any Price I was immediately intrigued. It deals with a fascinating front of the Shadow War that is arguably the most important of all: the war for the mind.

The novel’s premise is that Lee Harvey Oswald and other notorious assassins were actually under the hypnotic control of rogue psychiatrists working for the CIA. That might sound outlandish, but when one studies some of the historical assassins and mass shooters up to the present day, many of them do seem rather disconnected from their acts, as if they were committed by alter egos not under their control. Having read a few things about the history of CIA mind control (The Search for the Manchurian Candidate is a classic) and MKUltra, I find the premise of this novel chillingly plausible.

The book begins in the early 1960s, as we meet the psychiatrists, intelligence officers, criminals and dupes who will carry out the Kennedy assassination. Mafia leaders, incensed by the Kennedy brothers’ aggressive prosecution of their activities, and CIA men, equally incensed by JFK’s failure to back the overthrow of Castro, conspire to have the president whacked. They find the perfect patsy in Lee Harvey Oswald, an early subject of a secret CIA mind control program. Two psychiatrists have discovered how to hypnotically create multiple personalities in their subjects and program them to obey commands when code phrases are spoken (readers of classic spy thrillers will be reminded of Richard Condon’s The Manchurian Candidate and Walter Wager’s Telefon). Meanwhile, a sexy British nightclub singer named Debbie Rawlins is recruited and programmed–her gig as a travelling entertainer for military personnel providing a convenient cover for her programmed personality’s more lethal vocation.

The narrative jumps ahead several years as the two psychiatrists, wanting to get away from the heat of Congressional investigations, media attention and public suspicion that the Kennedy assassination was a conspiracy, relocate to a house in the northern English countryside to lay low and continue their research. But when two suspicious British MI6 agents break into the house of their CIA handler they discover incriminating papers connecting the doctors to the assassination program. Being shady operators, the MI6 men take full advantage of the situation by blackmailing the American psychiatrists into employing their hypnotic assassins to take out some troublesome IRA leaders in nearby Northern Ireland. So a corporal named Walker is recruited and programmed for the hits, and Debbie Rawlins is reactivated.

The story finally gets a clear protagonist when an MI6 agent named James Boyd is asked to investigate a psychiatrist’s report of a patient who is having dreams about political murders that he should have no way of knowing about.  It seems that the patient (Walker) is experiencing a mental breakdown, as memories of the hits performed under his alter ego begin to leak into his daily life via disturbing dreams. Boyd’s sleuthing uncovers some disturbing facts about both Walker and Rawlins, the psychiatrists who programmed them, their connections to the MKUltra assassination program and the IRA hits. What are CIA assassin programmers doing in the UK, and why are they having people offed for MI6?

Boyd is faced with a moral dilemma: does he go along with his superiors’ desire to bury the scandal in the interest of transatlantic spook relations, or does he seek justice for the pawns of the hypno-assassin program whose lives they ruined? The story has the sort of cynical ending that you find in a lot of British spy fiction, which you’ll never get in more popular spy fiction novels but no doubt has more resemblance to the realities of shadow warfare. Anyone imagining that shadow warfare is some kind of morality play, where there are clear good guys and bad guys and the former always win, is surely living in a fantasy world!

While the set up of this story is excellent, the execution was a bit off. The narrative is very disjointed in the first half; it jumps from location to location, introducing characters and plot threads that don’t seem connected. It’s hard to maintain any narrative tension when you’re not sure who the protagonist is and you’re bouncing around every page or two, though this gets better in the second half as Boyd’s investigation becomes the focus. My other complaint is that the story lacks action and intensity; it’s a bit too political and cerebral, more John le Carré than Jack Higgins, which is not how I prefer my spy thrillers. There were a few short, intense scenes of violence and a bit of shadow operating, but not enough for my liking.

I don’t know if this is typical of Allbeury, but for now I’ll put him in the category of interesting authors who are worth reading further when I’m in the mood for less pulpy spy fiction.

Get a copy of Pay Any Price here. 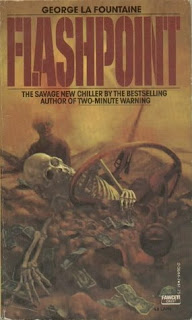 Flashpoint is yet another obscure thriller from the 1970s remembered only because it was made into a film–a 1984 adaptation starring Kris Kristoffersen which, I vaguely recall, was quite good.

This novel is intriguing in the way it connects two fronts of the Shadow War that are usually distinct: the Border War and the Assassin War. The protagonists, Logan and Ernie, are two good ol’ boy Texas border patrolmen who enjoy nothing better than patrolling the very desolate “section 7” of the U.S.-Mexico border in their jeeps, tracking down illegals across the desert and taking them back to Mexico. They don’t do this out of any spite toward the illegals, but simply for the challenge, solitude and outdoor adventure the job affords them. Both men are military veterans with experience operating in dangerous territory–Ernie in Korea and Logan as a Green Beret in ‘Nam–and patrolling the Mexican border is a good peacetime use of their skills. Author La Fountaine does a good job of fleshing out their backgrounds and motivating their behavior; while they may be obnoxious “bubbas” at times who like to get drunk and visit Mexican whorehouses in their spare time, they are full of life and love adventure in a way you can’t help but respect.

As the story opens, the patrolmen learn that a new high tech border security system is going to be implemented in their region, which would turn these border cowboys into glorified desk jockeys, watching for beeping lights on computer screens instead of riding out under the sun looking for “Indians” to apprehend. This puts them in a depressed and desperate state of mind, but that soon changes when Logan, taking a shortcut through an untravelled desert wash, discovers a crashed jeep buried deep in the sand. Digging it out, he finds a skeleton and a box full of cash–$850,000 in small, sequentially numbered bills. At this point the novel becomes a detective story, as Logan and Ernie try to discover the identity of the driver, the source of the cash, and whether it is safe to spend it without alerting authorities.

Things soon become even more confusing–and deadly–as shadowy forces and corrupt players converge on the patrolmen’s turf. People connected to the cash are being killed off, and the patrolmen feel the noose tightening around them. Should they take the money and run for the border, or play it cool and deny everything? Who exactly is looking for the money, and why? Who can they trust? What was a jeep doing loaded with cash in the south Texas desert, who was the mysterious driver, and why is someone willing to kill anyone who knows anything about them? Everything is answered in the final pages, as the narrative gets increasingly dark, violent and desperate and a sinister conspiracy is revealed. While some of the plot developments seemed a little far-fetched, I think the shock ending was appropriate and should come as no surprise to veteran Shadow Warriors.

Flashpoint is one of those cynical, paranoid, pessimistic stories that could only have been written in the 1970s–a period I love because I think it dealt more realistically with the nature of society and humanity than what came before or after. It was a unique era, in the wake of the 1960s, when Americans were free to be simultaneously politically incorrect, sexually liberated, and very cynical of the powers that be. Logan expresses the spirit of the times well when, after Ernie denies that the JFK assassination was a conspiracy, responds:

“Ernie,” Logan cried in anger, “how can you say that after all the shit that’s come out about Watergate and the CIA and the FBI and the assassination plots over the world? How can you still say that?”

Everything that happens subsequently in the story only vindicates Logan’s cynicism. If you enjoy novels like Six Days of the Condor and films like Parallax View, where ordinary people are caught up in the machinations of sinister forces that go right to the top of the power structure–which is revealed to be hopelessly corrupt–you should add Flashpoint to your reading list. This book is a good reminder that the Shadow War is not just a war on the ground between spies, criminals and covert operators, but a war of the mind against the vast apparatus of lies and illusions that daytime society runs on.

While I wouldn’t call La Fountaine a great writer, and some of the plot twists were a little implausible, overall he’s spun a very compelling tale here that kept me turning the pages until the end. If you like good old adventure thrillers with a heavy dose of 1970s paranoia and political intrigue, you should enjoy this as much as I did.

Get a copy of Flashpoint here.