The Sour Lemon Score is the twelfth entry in the legendary Parker crime fiction series, published in 1969. Like the phenomenal series opener, The Hunter, this isn’t really a heist novel, but a story about Parker trying to track down and get revenge on the man who double-crossed him, nearly killed him and took his money.

As the story opens, Parker and three accomplices are about to execute a heist of a cash delivery at a bank. This was a great scene; the clever use of radio-controlled explosives, smoke grenades, deception and professional violence made it the kind of well-planned commando-theft operation that makes Parker novels so fun to read.

Equally fun are the inevitable f*k-ups and double-crosses that turn a smooth heist job into a twisted, violent novel-length adventure. In this case, the cross comes courtesy of the twitchy, sketchy driver George Uhl, who decides to try to take the whole pie by eliminating the other heisters just as they’re about to divvy it up. Unfortunately for him, Parker gets away, and the rest of the novel is basically a detective story from the point of view of a ruthless, sociopathic criminal. Because Parker is a detective from hell, who will beat, threaten, rob, vandalize, deceive or kill anyone he damn well pleases until he gets what he wants: his loot, and George Uhl’s head.

Donald Westlake (writing as Richard Stark), author of over a hundred mystery and crime novels, excels at tight plotting and detailed, realistic procedurals. We are taken step-by-step through Parker’s investigation as he relentlessly pursues Uhl’s associates across the eastern seaboard, always seemingly one step behind Uhl. His task is complicated when a psychopathic associate of Uhl named Matthew Rosenstein gets involved in the chase, and soon the three very dangerous men are converging on the quiet suburban family home of a high school fan-boy of Uhl’s who gets far more excitement than he bargained for. The conclusion was slightly out of character for Parker, but it did leave loose ends that would be tied up in the 20th entry in the series, Firebreak, when some of these characters return to bother Parker 30 years later.

Another thing that makes Westlake such a great writer is his gift for creating incredibly well-drawn, memorable characters. The old-fashioned granny who sells Parker black market guns, the whiny single urban female who can’t say no to her abusive ex-boyfriend, the brutal, sadistic Rosenstein and his foppish gay partner Brock, the square family man Saugherty who fantasizes about running with the bad boys, the slimy, psychopathic George Uhl–this short novel has an amazing array of characters who are damaged and dangerous in totally believable ways.

After the relatively weak previous entry in the series, The Black Ice Score, The Sour Lemon Score is a return to form for author Westlake, and a return to the brutal, unstoppable force that is Parker when someone has screwed him over.  Highly recommended for fans of hard-boiled crime fiction or just plain great story-telling.

Get a copy of The Sour Lemon Score here.

Black Ice Score, published in 1968 by Donald Westlake (writing as Richard Stark), is the eleventh entry in the incomparable Parker series about an ultra-tough but likeable heist-man.

This time the target of Parker’s heist is $700k worth of diamonds smuggled into New York by the corrupt leader of a small African nation called Dhaba. The diamonds are being kept on the top floor of a museum where the leader’s brutal brothers-in-law have taken residence and guard them 24/7. A diplomat from Dhaba wishes to steal the diamonds back on behalf of his countrymen, so he finds the best man in the business and hires him as a consultant. Parker’s task is to devise a plan to get into the building, past the guards and grab the diamonds. His job is complicated by a group of white colonials allied with a black general from Dhaba, who have learned about the diamonds and want them to fund their own takeover of the country. They are trying to strong-arm Parker into telling them where the diamonds are, going so far as to kidnap his steady girlfriend Claire and forcing him to cooperate. There’s also a joker in the pack in the form of a shifty, unpredictable character named Hoskins who has a bad habit of annoying Parker and appearing at inopportune times (Westlake loves these characters).

This is an atypical entry in the series in several respects. For one, Parker is not doing the job himself, but is only acting as a paid consultant for amateurs. He plans the heist and trains the Africans, but doesn’t participate directly in the theft. This is obviously a let down for Parker fans, sort of like going to an Elvis concert and being told that an impersonator is going to perform instead—though the author does a pretty good job of making the amateurs’ point of view interesting. The international political angle is also unusual for this series, which is normally apolitical and focused entirely on the all-American business of taking down big scores. In the spy-crazy 1960s it seemed that every thief and thug was getting a piece of the geopolitical action. Third, Parker seems strangely charitable and caring at times compared to his brutal sociopathic persona earlier in the series. Apparently his long-term relationship with Claire is softening him and making him a bit less Terminator-like than before.

There were some interesting moments in this story for students of shadow operations. The planning of the heist, the social engineering used to case the building, and the tools and tactics employed were reminiscent of the antics of real-world master jewel thief William Mason that I discussed in this review. This is the most ninja-like op in the series so far: the use of deception to gain entry to a stronghold, crossing from rooftop to rooftop, roping down an elevator shaft, using gas bombs to incapacitate guards, dressing all in black, surprise attacks, are all classic ninja tactics, handled with Westlake’s trademark realism.

The short novel moves quickly to a climax as the theft gets very bloody, bodies pile up, and Parker makes his re-appearance just in time. Hoskins is still a joker, the colonialists still hold the trump card Claire, and Parker has to bluff and go all-in to win with the hand he’s dealt. While risking his neck to save a woman wasn’t the old Parker’s style, this slightly kinder, gentler Parker does just that to try to save Claire from the clutches of the enemy.

This was definitely a lesser entry in the series, but still entertaining and worth the few hours spent reading it if you like heist novels and appreciate quality writing. Westlake is the genre’s master and Parker its greatest character, so even a sub-par installment is a cut above most other novels of its kind.

Get a copy of The Black Ice Score here. 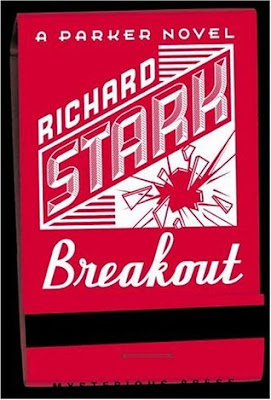 Breakout is the 21st book of the “Parker” series, by Donald Westlake (writing as Richard Stark). If you’ve never read any Parker novels, I recommend that you start with the first one, The Hunter, and proceed from there. Few books capture the intensity and drama of criminal shadow ops as realistically as these. Parker is a professional thief, but he’s no non-violent cat burglar, stealthily infiltrating buildings, cracking safes and getting away cleanly with the loot. He threatens, pistol-whips, beats, binds, gags, and occasionally kills to complete his missions, but always with an almost robotic level of efficiency and cool.

Parker novels are what you might call “criminal procedurals”—they give detailed, realistic accounts of the planning and execution of Parker’s heists and associated criminal activity. We learn about the minutia of getaway routes, entrances and exits, guards, escape vehicles, etc. Parker prefers low-tech, direct means to assault his targets, never relying on gadgetry when good old guns, threats and surprise are so much more reliable. But as in real life, nothing ever goes according to plan; much of the fun of these stories is finding out how Parker improvises when an op goes badly wrong or someone crosses him.

Breakout offers a new twist on the Parker formula: this time he has to break out of a facility instead of in—the facility in question being a prison, where he finds himself for the first time since the series began. Parker, being a guy who doesn’t take well to involuntary confinement, and being linked to the murder of a prison guard decades ago, immediately starts angling to escape. Recruiting two other inmates and with help from outside, he makes a harrowing but highly believable escape. And that’s just part one of this tale. The crew, now free and short of cash, decides to take on a heist that one of them had previously scoped out: breaking into a former armory loaded with jewelry that is as impregnable as the prison they just got out of. The ensuing break-in is as gripping as the break-out; author Stark describes both in such photographic detail that you could swear he has done them himself! There are further escapes, evasions, murders, police procedural work, hostage-taking, and a climactic manhunt for Parker the fugitive. The ending is particularly well done.

After reading five early Parker novels from the 1960s, it’s a bit jarring to read about him operating in a 21st century world of cell phones, internet and security cameras. But as always, Parker adapts to his circumstances and relies on the tried-and-true methods of his trade, so it doesn’t really affect the narrative. Forty years after the first novel, Westlake is still the master of hard-boiled crime fiction, and Parker is still the master of hard-boiled crime. “Breakout” is a top-notch addition to the best crime series ever written. Highly recommended.

Buy a copy of Breakout here.